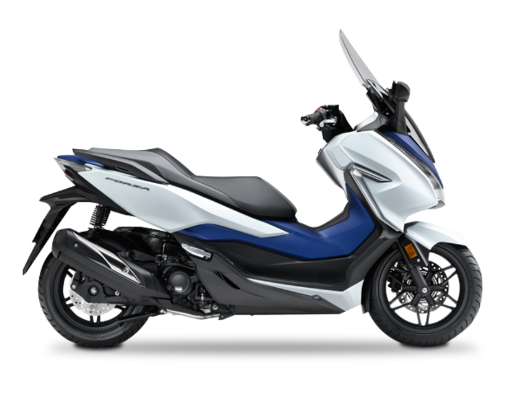 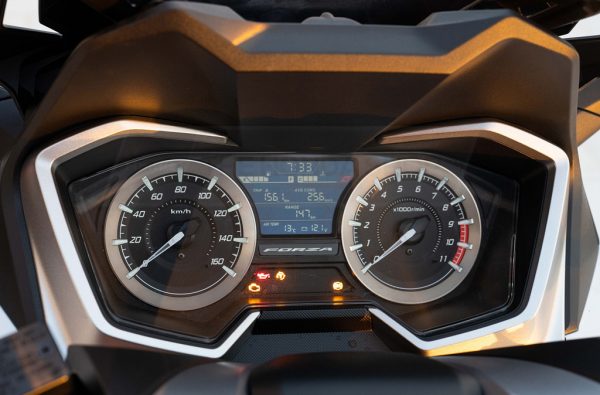 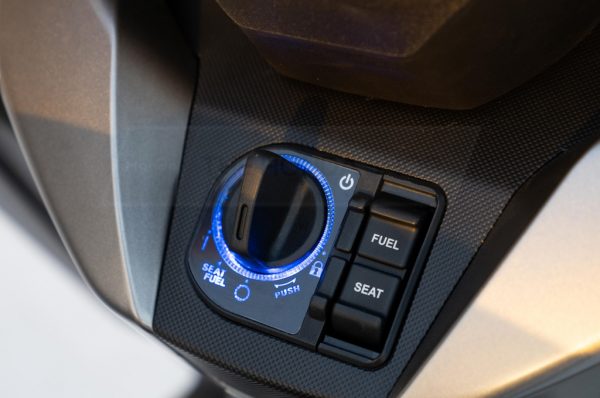 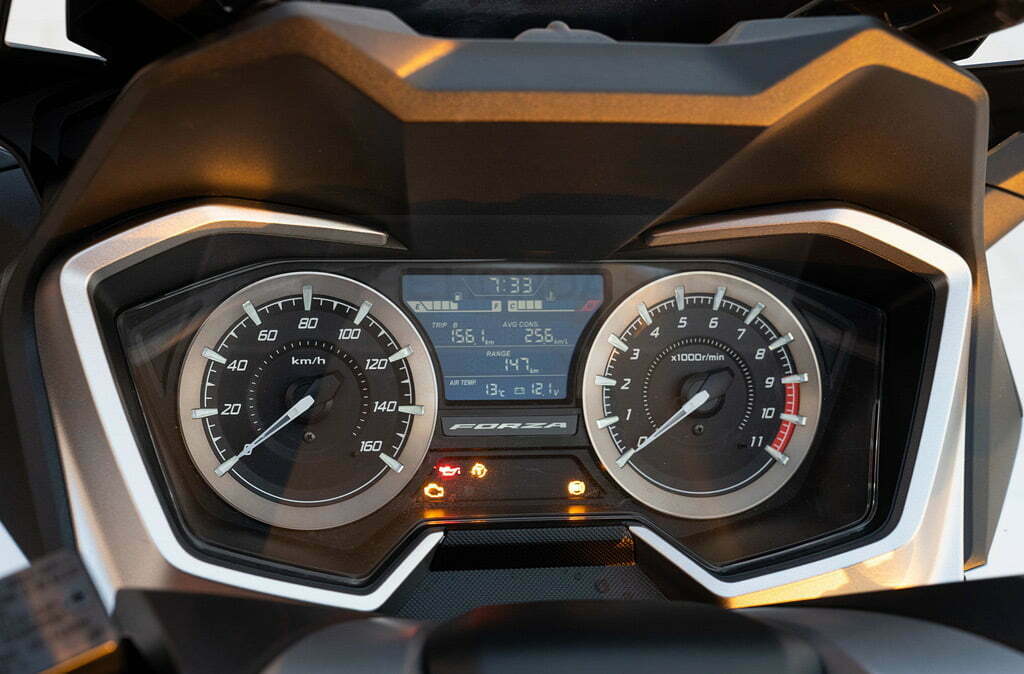 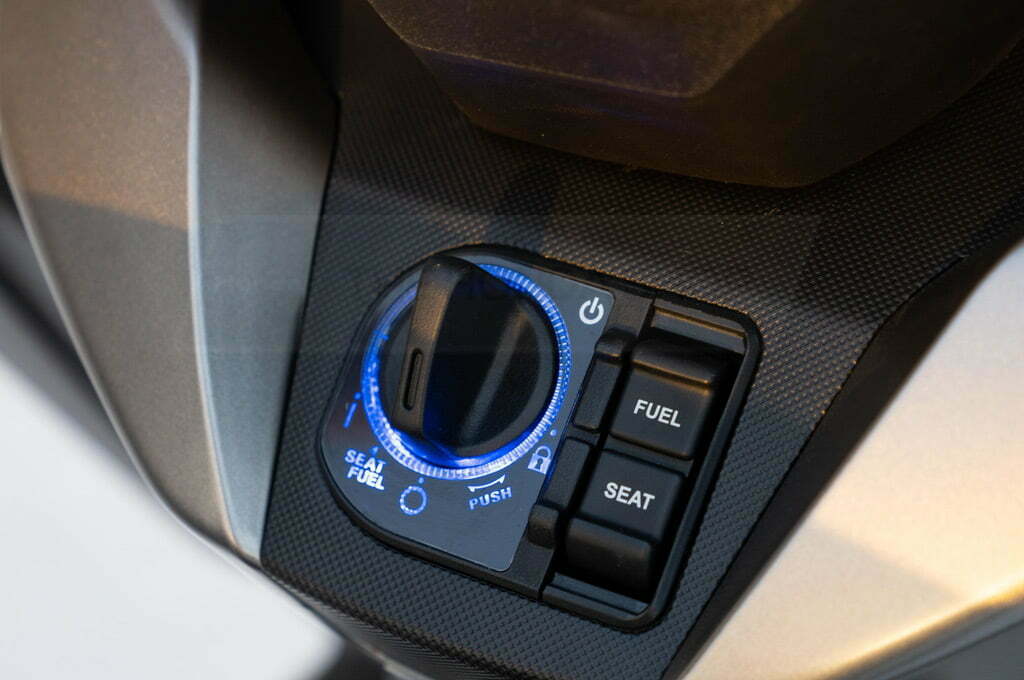 The Forza name has long been a powerful force in Honda’s two-wheeled line-up. Its history as a premium, mid-size scooter goes back to the year 2000: the first model set the template, delivering a lively ride, plenty of storage room and an innovative combined braking system. It was well received throughout Europe, where owners found its multi-role capability useful in every aspect of daily life.

While retaining its trademark mix of sporty and GT character, the Forza 300 has constantly evolved, aiming to exceed owners’ expectations with every upgrade. In 2004 it gained Honda’s S MATIC electronically controlled CVT (Continuously Variable Transmission), a theft-deterring Smart key, highly efficient PGM-FI fuel injection for the engine and space for two full-face helmets under the seat.

2005 saw the addition of ABS brakes and, in 2008, luxurious touches like an audio package and speakers plus upgraded S MATIC (with phased auto shift mode) and Combined ABS brakes were added. In 2016 it moved on again, as the Forza 300 with a new ‘sit-in’ design large enough to carry two people in total comfort, even at highways speeds.

2018 marked the unveiling of a radically revised Forza 300 – lighter, smaller, sharper and sportier – following in the hugely successful wheel tracks of its little sibling, the Forza 125, while retaining all the best attributes of its ‘GT’ nature. A ‘Limited-Edition’ model with Grey/Gloss Black colour scheme and matching Smart top box added an exclusive choice in 2020.

Now, for 2021, it’s time for another advance. The Forza 350 is faster, even more useful and, of course, stylishly desirable with it.

A 50cc increase injects 16% more peak power, at 21.5kW but the Forza 350’s engine is significantly stronger all the way through the rev-range, delivering faster acceleration and a top speed raised just over 6%, to 137km/h. It’s also EURO5 compliant.

Cosmetic and aerodynamic updates have been applied to the front fairing sides, mirrors, rear side panels and engine cover for a sleeker overall look with even more premium appeal; the chassis itself is unchanged but now connects to a lighter swingarm, and the electric screen adjusts with an extra 40mm travel to improve wind protection.

The instrument panel has also been refreshed, and the Forza 350 rider now has the possibility of linking to their smartphone via Bluetooth with the new Honda Smartphone Voice Control system which is available as an option from new. A USB socket replaces the ACC charger.

The 2021 Forza 350 will be available in the following colour options:

Thanks to the extra 50cc capacity (to 330cc from 279cc, with no gain in overall kerb weight) the liquid-cooled, fuel-injected SOHC four-valve unit’s peak power rises from 18.5kW to 21.6kW @ 7,500rpm, with maximum torque increasing to 31.9Nm @ 5,250rpm. The dyno graph comparison graphically displays the whole picture showing how both power and torque rise considerably from 3,500rpm up.

The crankshaft has also been redesigned and is now 10% lighter. This has been achieved without any change to the dimensions of the journals, while still maintaining the strength and rigidity required to transmit the higher output. Roller-type rocker arm, plain journal crank bearings and sealed crankcases deliver long-term reliability together with strong performance. To enhance piston cooling, an oil jet, as used on the CRF450R, sprays oil right to the back of the piston, advancing ignition timing and improving combustion performance. Oil capacity is 1.8 litres.

A revised intake sees throttle bodies increase to 36mm from 34mm, with inlet valves increasing 1mm to 28mm, increasing efficiency. Air is supplied via a 5.5 litre airbox. Intake and exhaust ports have also been completely redesigned. The intake port now draws air in more efficiently, utilising a strengthened tumble flow within the cylinder for more consistent fuel combustion. Exhaust gases are now expelled via a straight exhaust port, rather than the curved port of the previous design, further improving efficiency.

To reduce exhaust gas resistance, the new muffler now consists of two distinct chambers rather than three. Improvements to the pipe connecting the expansion chamber as well as the size and location of the catalyser also improve gas flow and purification.

Internal friction is reduced through a 5mm offset cylinder, the introduction of hydraulic cam chain adjuster and the use of a scavenger pump. Used on high performance machines, the pump lowers the internal pressure within the engine, reduces oil agitation and decreases pumping losses and internal rotational friction. A newly adopted balancer shaft further reduces vibrations and contributes to a smooth enjoyable ride.

An automatic centrifugal clutch works a V-Matic transmission (with ratios set for fast low speed reaction and smart acceleration) and belt final drive. Through the 2021 update the engine cover has been redesigned to complement the new bodywork.

The Forza 350’s engine is equipped with Honda Selectable Torque Control (HSTC). The system detects any difference between the front and rear wheel speeds, calculates the slip ratio and then controls engine torque via the fuel injection to regain rear wheel traction. HSTC can be switched ON-OFF via a switch on the left handlebar. A ‘T’ indicator in the digital display flickers when the system is working to manage grip.

The engine is also now homologated for EURO5, which from January 1st 2020 introduced significantly stricter engine emissions standards compared to EURO4. These requirements include substantial reductions in permitted carbon monoxide emissions, an over 40% decrease in total hydrocarbon emissions, tougher misfire detection and the introduction of a particulate matter limit.

The Forza 350’s lines flow back from its electric screen (controlled by a switch on the left handlebar) which, for the 2021 update gets a revised shape and an extra 40mm travel to adjust through 180mm. It’s designed to provide wind protection, with airflow directed around and over the rider’s head, and reduce wind noise. Stability and comfort at higher speeds – and long distances – can be instantly exchanged for a greater sense of freedom around town, by lowering the screen.

Sculpted for both style and aerodynamic efficiency, the Forza 350’s sharp design lines give a clean, smooth modernity, creating an impression of energetic sportiness and premium desirability. The styling team’s key words of ‘aggressive, technical and powerful’ find expression in a new spoiler-type surround below the headlight, refreshed fairing side panels with a distinctive ‘Z’ design line, and a steeply descending character line for the rear side panels that create a forward-looking, purposeful aesthetic.

Pillion grabrails are now plastic rather than aluminium, saving 1407g, further improving mass centralisation and agility. For comfort at higher speeds a larger front air duct manages negative pressure in front of the rider, reducing the natural effect of the wind pushing the rider back.

Two full-face helmets can be stored under the seat, and it’s also possible to partition the storage area to house a helmet and/or rain gear and A4 sized bags. The front left inner fairing pocket is lockable, and its internal space can be arranged for the rider’s convenience, to hold a phone and water bottle, for instance. It also houses a USB socket, which replaces the 12V ACC charger of the previous design. All lighting is LED.

Keeping its rider fully connected, the Forza 350 also has the Honda Smartphone Voice Control system available as an option from new, which links the rider to their smartphone while on the move and allows voice management of phone calls and music. A helmet-mounted headset is needed and the smartphone connects via Bluetooth; management of Honda Smartphone Voice Control System is from the left switchgear and dash.

The Forza 350’s Smart Key – as well as controlling the main ignition switch knob and compartment locking – also manages the optional 45L Smart top box. With the Smart Key in the rider’s pocket the box is unlocked, and automatically locks when the rider walks away. It can also be locked from the key. To maintain the internal volume of the box the actuator mechanism is located in the rear body of the machine.

The front and rear indicators of the Forza 350 have a new auto-cancelling Emergency Stop Signal feature. Once the ABS modulator detects sudden braking, the hazard lamps flash at high speed to warn other vehicles.

A sturdy, yet lightweight, tubular steel frame is at the heart of the Forza 350’s reassuring feel on the road. Wheelbase is 1510mm, rake is 26.5° and trail 89mm. The radiator is now located in front of the fuel tank for better cooling performance, and the battery is found between the fuel tank and the under-seat storage area, focusing mass to the centre. Wet weight is 184kg.

The cast aluminium 15-inch front wheel is fitted with a 120/70-15 tyre while the 14-inch rear wears a 140/70-14 tyre, offering maximum traction and ride comfort. A 256mm single disc performs stopping duties up front, mated to a 240mm rear, with the benefit of 2-channel ABS for braking control on slippery surfaces.

Accessories
A range of Genuine Honda Accessories are available for the Forza 350. They include: